Quiet Roads are proposed in the council's Active Travel Plan, as part of an active travel network in West Lothian. 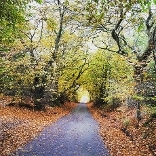 What are Quiet Roads?

Quiet roads - otherwise known as cycle, pedestrian and horse rider friendly roads - are in place in various parts of Scotland. They are designated rural roads where traffic volumes and vehicle speeds are already low, and are aimed at encouraging people to travel by foot, by bike and on horseback.

The main features of designated quiet roads are:

The main role of quiet roads is to form part of an active travel network - that is, a network of routes to encourage people to walk and cycle for everyday journeys. These routes can also support local economic development by attracting visitors, and generally support access to the outdoors for everyone. Such routes can be seen in Clackmannanshire and Perth & Kinross.

Criteria that other local authorities have used to designate quiet roads include: 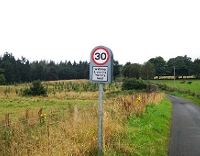 In 2015, data on traffic volumes and average speeds were gathered on a number of potentially eligible routes across the area. The routes surveyed tended to be unclassified or C-class roads, rural in nature, narrow and unlined, with relatively low traffic volumes and speed. Some were suggested during the community consultation for the council's Active Travel Plan.

This survey work was not exhaustive, and there may be other eligible routes. Many routes considered to date connect settlements directly or link to existing walking and cycling infrastructure (such as Core Paths). In some cases, 'gap' infrastructure may be needed to link up routes, and assessment of this is ongoing.

A period of public consultation ran from 1st November 2016 for six weeks (until 13th December) on the concept of Quiet Roads. The council invited communities and route users to offer their views on selected routes considered to date and other routes they would like to suggest as potential Quiet Roads via an online survey and online mapping tool. Static exhibitions with some paper surveys were presented at Beecraigs Country Park Visitor Centre, Stoneyburn Community Centre and the West Calder and Harburn Community Development trust office at Union Square, West Calder. The results of this consultation and proposed next steps, if appropriate, will be taken to Elected Members in 2017.