West Lothian's past is still very much present all around us. Important historic sites like Cairnpapple and Linlithgow Palace, stately homes like Hopetoun and the Binns, and the many museums and heritage attractions all help to bring the past alive. 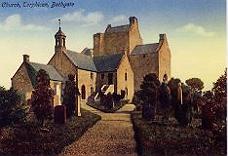 Linlithgowshire (the county's official name until 1925) was a pleasant county - fertile and well-wooded with gentle rolling hills in the north of the county, though bleak and moorish in the south. It was among the smallest counties in Scotland, and was the county with' the lowest highest point' - the Knock near Bathgate - still a fine viewpoint though only 311 metres high.

West Lothian sits astride the main routes between Edinburgh and the west, and also between Edinburgh and Stirling, making it a significant place in the past.  Its most important prehistoric site is Cairnpapple in the Bathgate Hills - a site of national significance.  From here - one of the highest points in the county - you get great views up to the Highlands, south towards the Pentlands, and from the Forth to the Clyde. It's easy to see why our prehistoric ancestors chose it as a place of ceremonial and burial.

In the medieval period the king built a defensive fort on the edge of Linlithgow Loch, from where he could control and administer the surrounding lands.  In the 15th century this was rebuilt as the magnificent royal Linlithgow Palace.  Though damaged by fire in 1746, the ruins still reveal its past glories. 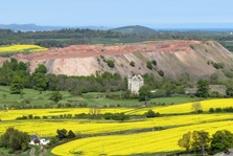 Early industries in the county were small-scale - the silvermining below Cairnpapple, the water-powered cotton mill at Blackburn, Linlithgow's paper mills, and the shallow coal pits around Bathgate and Whitburn.  Later industry was less kind to the landscape: from the 1840s and 50s, extensive deep mining - first ironstone up by Fauldhouse and Whitburn, then coal and shale - as well as foundries, brickworks and railways changed the face of the country, interrupted the water courses, degraded much of the farmland, dotted the landscape with bings.  Many of the bings, once seen as a blight, have been removed.  The remaining ones are treasured as industrial monuments - the pink ones are shale, the grey ones coal.

The heavy industries brought prosperity for the few, employment for the many.  The population of the industrial areas grew rapidly, and new villages sprang into being to house the mining workforce.  Because of the speed of growth,  miners' rows were thrown up as quickly and cheaply as possible, leaving a legacy of poor housing.

James Young and Robert Bell and others pioneered the world's commercial oil industry right here in West Lothian.  Workers came from far and near to the new jobs in the mines and the oil works.  Though American petroleum was discovered some ten years after the start of West Lothian's shale industry, the local engineers continually refined their processes to keep Scottish shale oil competitive.

By the outbreak of the First World War, West Lothian was in its heyday: strategically located in the Central Belt between Edinburgh and Glasgow; with many thousands employed in shale, coal, and the other heavy industries; supplying the oil which powered the mighty Royal Navy; but one of the worst housed counties in the whole of Scotland. Over the next fifty years the building of thousands of council houses gradually provided a decent house for every local family.

Since the war, heavy industry has gone, and been replaced by electronics and service industries.  Today West Lothian is once more a desirable place to live and work, but the past is all around us...

To find out more

To find out more, visit the West Lothian Local History Library, or the Council's Archives and Records Centre, or one of the many museums in the county.

​To see some of our extensive collections of old photographs, visit our Flickr photostream.