Knowes Colliery Woodland is located on the southern edge of Fauldhouse and it is established on former coal mining land. This 18 hectare, recently improved conifer woodland area provides a circular surfaced footpath which offers attractive walking routes through this natural environment. 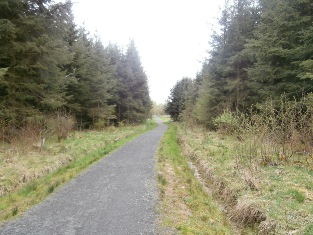 Knowes Colliery Woodland takes its name from Fauldhouse No. 1 Pit (referred to as the Knowes) which was a coal mining pit that was once sited on the land. The colliery, owned by Barr & Thornton Ltd, started yielding coal in the 1890's and remained active until its eventual closure in 1946.

After being abandoned for several decades, with the mineshaft and the bing still intact, the former colliery land was remediated in the 1970's for potential industrial development plans. However, this never materialised, instead during the early 1980's it was transformed into a coniferous woodland plantation.

Unfortunately, the woodland became overgrown, unmanaged and difficult to access, hence it provided very little amenity value. In 2008 West Lothian Council, who own the site, took action and enlisted the help of the Central Scotland Forest Trust (CSFT) to prepare proposals to improve the land. With £176,884 of funding supplied by various parties, these proposals became a reality in September 2013 as the project came to its completion.

The project has encompassed the restructuring and diversification of the woodland, the formation of a new 1.2km circular surfaced footpath, the furnishing of new benches, signage and interpretation boards and also the upgrade of the two access points on Cemetery Road and Shotts Road. This newly enhanced woodland provides an environment which now brings visitors many enjoyable recreational opportunities.

The woodland is a mature conifer plantation containing predominantly Sitka Spruce and Lodgepole Pine. However, recent site upgrades have introduced a greater diversity of tree species (including mixed broadleaves), whilst open areas have also been added. As a result, the woodland has become more biodiverse and habitable for a range of wildlife. Roe Deer and Fox like to seek refuge in the dense woodland, whilst, the Sitka Spruce habitat provides ideal conditions for a number of bird species such as Blackbird, Crossbill, Siskin and Coal tit. Birds of prey like the Sparrowhawk and Goshawk also enjoy hunting in and around the woodland. In the summer butterflies such as the Orange Tip can be found amongst the wildflowers.

Knowes Colliery Woodland is located on the southern edge of Fauldhouse. To reach Fauldhouse by car exit the M8 motorway at junction 4 and travel on the A705 to Whitburn. Then take the A706 to Longridge and turn off onto the B7010 to Fauldhouse. The train station in Fauldhouse is located next to the site, only a 2 minute walk away. It is on the Shotts Line and it receives trains from Edinburgh and Glasgow. Several bus stops are located along Fauldhouse Main Street. 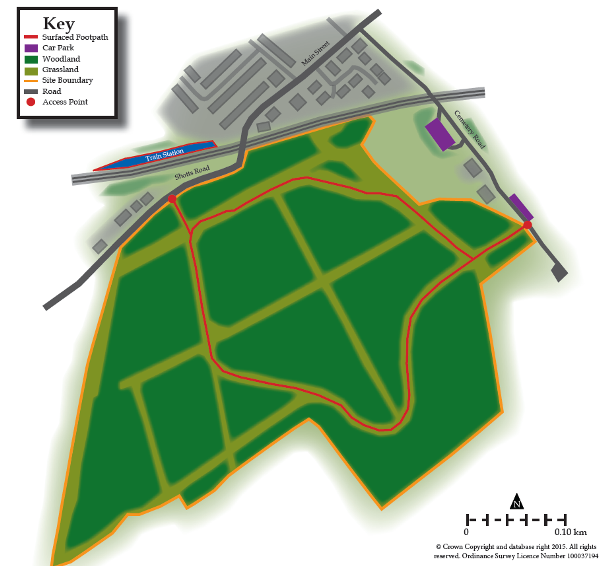