An Air Quality Management Area in Linlithgow was declared in April 2016 due to exceedances of both Nitrogen dioxide (NO2) and fine particulates (PM10). A draft Air Quality Action Plan (AQAP) has been developed and will be subject to public consultation. The AQAP will set out measures to reduce air pollution in Linlithgow.

What have we done?

A Detailed Assessment of Air Quality in Linlithgow has been carried out and found the following:

More information can be found in the

The boundaries mirror those in the West Lothian Local Development Plan Proposed Plan. This includes Linlithgow, Linlithgowbridge and land allocated for development.

Air Quality Management Area (AQMA) Map for Linlithgow. Displays a larger version of this image in a new browser window. 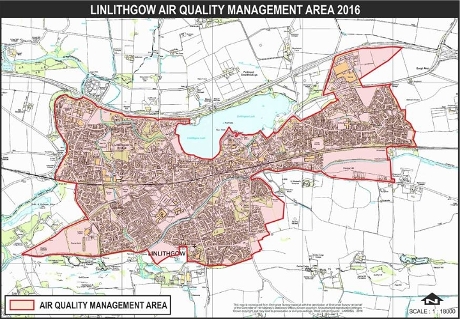 Where are we now?

During the last 3 years air pollution levels have met air quality objectives (limits). Therefore a detailed assessment is being carried out to assess whether the Linlithgow AQMA should remain in place. If the AQMA remains in place, the AQAP will then be finalised.