Broxburn Academy's under 18 girls football team have been honoured for their victory in the final. 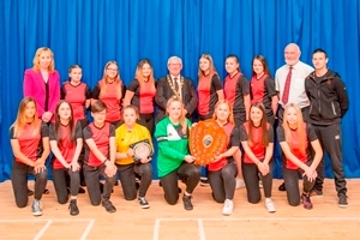 Provost Tom Kerr recently visited Broxburn Academy to present the team with a Silver Salver in recognition of their fantastic victory against Turnbull High School from Bishopbriggs.

At the start, it looked like Broxburn's team of mixed age players might struggle against a team of bigger, mainly S6 Turnbull girls at Petershill Park in Glasgow. However Broxburn went on to win 7 - 0 thanks to a goal from Rosha Muirhead and six goals from Emma McFadyen. Emma is believed to be the first player in the history of the competition to hit a double hat-trick in a final.

"To win by a 7 - 0 margin in a final is an incredible achievement, and the girls deserve full credit for their hard work that has resulted in them lifting the top trophy."

Broxburn Academy Headteacher Peter Reid added: "It's great to see the incredible achievement of our under 18 girls honoured by the Provost of West Lothian.

"Everyone at Broxburn Academy is immensely proud of the team and their coach Rab Swindells for their amazing feat. The dedication shown by the team that has led them to bring the Scottish Seniors Shield back to Broxburn for the second time in three years is outstanding.

"Thanks to everyone in the community who has shown their support for the team, with pupils, parents and local businesses among those giving their full backing to the team."